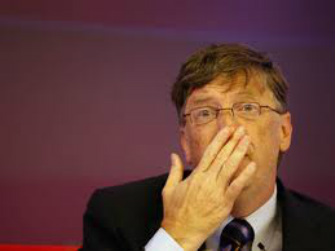 Entrenched in action and always on the front lines of saving the world and feeding the hungry, Bill Gates gets right to the “root” of solving the world's food shortage by putting his money where his friends at the Rockefeller Foundation tell him to.

This week, The Associated Press reported Bill Gates believes “Countries can embrace modern seed technology and genetic modification or their citizens will starve.” This comment was directed at the naysayer's of genetically modified (GM) seeds and the belief that “high-tech” solutions to world hunger are bad for the environment.

Why are Bill Gates and The Rockefeller Foundation supporting the proliferation of patented seeds, GMOs, and at the same time, investing tens of millions of dollars to preserve every natural seed variety on this planet in a bomb-proof doomsday vault? Wouldn't it be best to cultivate the world's natural seeds, while preserving them, and nourishing and nurturing our world's farms and precious soil?

Is Gates confused and misled? I think not.

The Global Crop Diversity Trust is based in Rome. Its Board is chaired by Margaret Catley-Carlson a Canadian also on the advisory board of Group Suez Lyonnaise des Eaux, one of the world’s largest private water companies. Catley-Carlson was also president until 1998 of the New York-based Population Council, John D. Rockefeller’s population reduction organization, set up in 1952 to advance the Rockefeller family’s eugenics program under the cover of promoting “family planning,” birth control devices, sterilization and “population control” in developing countries.

Other GCDT board members include former Bank of America executive presently head of the Hollywood DreamWorks Animation, Lewis Coleman. Coleman is also the lead Board Director of Northrup Grumman Corporation, one of America’s largest military industry Pentagon contractors.

And so the plot thickens. Are Gates and his GCDT buddies on a mission from God to feed and serve the world's hungry, or are they on a mission to control the world's population through mass planting and distribution of GMOs?

Cables released by WikiLeaks on Wednesday, January 25, 2012, reveal new details of the US effort to push foreign governments to approve GE crops and promote the worldwide interests of agribusiness giants like Monsanto and DuPont.

A key component of the US plan to dominate world agriculture with GM seeds is the absence of labeling of GM foods. No labeling means US consumers can not exercise informed choices in the marketplace, reducing the likelihood of a consumer revolt.

Last year, Miriam E. Sapiro, Deputy US Trade Representative, urged the European Commission to break its longstanding impasse blocking GM foods. Because GM seeds are patented it is illegal for a farmer to retain seeds for next years crops – offering huge financial benefits over traditional seeds.

If I were to gander a guess why Gates is so keen on feeding the hungry, I'd have to go with keeping up appearances as a free-spirited generous guy who's only concern is for the health and advancement of his own, yet to be revealed, agenda. 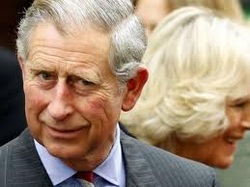 Last week the Guardian announced that the two main political parties in the United Kingdom (UK), Tories and Labour, were backing genetically modified (GM) food crops. This came as a surprise and disappointment to many, however, it should not have. The director of Rothamstead Research in the UK, the largest, oldest, and some say, the most important agricultural research station in the world, is Professor Maurice Moloney, a scientist best known for developing the world's first transgenic oilseeds and the genetically modified crop that is grown in Australia, RoundUp Ready(R) Canola.

Professor Moloney argues that GM is all about "feeding a hungry world and says serious scientific bodies have looked at GM technology in recent years and concluded it would be a mistake to exclude the technology from the arsenal of tools needed to deal with both global food security and environmental protection challenges".The RoundUp Ready System was specifically designed to require the exclusive use of Monsanto's herbicide. Monsanto, considered the Mother of agricultural biotechnology – with nearly 250 million GM RoundUp Ready acres worldwide.Using Moloney's arguments, politicians from both parties last week announced that “controversial genetically modified food crops” could help to massively increase food production to meet growing populations and consumption.

Last year, opposition to genetically modified foods exploded in UK, and quickly spread to the European continent. At the time, twenty-seven European Union (EU) states pushed back a commission proposal to lift import restrictions on animal foodstuffs containing traces of GM crops, up to a certain threshold, due to opposition from France and Poland.

In a confidential communication, dated Dec. 14, 2007, released by WikiLeaks on Dec. 19th, 2010, the US Ambassador to France at that time, Craig Roberts Stapleton, recommended creating a list if the EU continued to ban biotech seeds.

Agriculture Minister, Jim Paice, said the UK wanted the EU to agree to lift restrictions on trials and sale of GM products, so countries like the UK could "do it's own thing" so "we can use this technology where appropriate".David Ehrenfield, Professor of Biology at Rutgers University, said "Genetic Engineering is often justified as a human technology, one that feeds more people with better food. Nothing could be further from the truth. With very few exceptions, the whole point of genetic engineering is to increase sales of chemicals and bio-engineered products to dependent farmers"."In the United States, the widespread adoption of RoundUp Ready crops combined with the emergence of glyphosate-resistant weeds has driven a more than 15-fold increase in the use of glyphosate on major field crops from 1994 to 2005"

It is important to note, that scientists worldwide understand that the cultivation of GMOs will accelerate the loss of the world's food sovereignty and contaminate vital native strains.

Informing the World about the harmful effects of GMOs