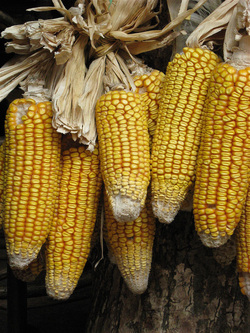 Washington - For the first time, the U.S. government has signed off on a large-scale experiment with genetically modified crops from Monsanto engineered corn seed.RT reported that the experiment will introduce Monsanto's engineered corn seed across America from South Dakota to TexasThe giant GMO corporation has been given the go-ahead to test a man-made corn variant which apparently can thrive in dry, unfavorable conditions. Much of the American south and southwest is experiencing abnormally arid conditions, and Monsanto says that the GMO seed could thrive under these drought conditions and "revitalize" a large portion of the nation's agriculture.However, it is far more likely that a success with the experiment would simply improve Monsanto's profits and not much more.The U.S. government has approved Monsanto's test of the biotech crop on farms owned by the company, to see if the seed could be commercially viable. If it is viable, then the seed is expected to be made available for purchase in 2013.

Dow & Monsanto in deadly race on the pesticide treadmillWed, 2012-01-11 15:13Marcia Ishii-EitemanYou’ve all heard the news: farmers across the country are losing their fields tosuperweeds so formidable and fast-spreading that they break farm machinery and render millions of acres of farmland useless. These superweeds have evolved as a direct consequence of Monsanto’s RoundUp Ready pesticide-seed package. Now superbugs are emerging, resistant to Monsanto’s transgenic insecticidal crops. Ecologists predicted this ecological disaster 15 years ago.

The big question is, can we possibly learn from this ecological and agronomic disaster? The U.S. Department of Agriculture and Monsanto’s rival, Dow Chemical, apparently cannot.

From bad to worse instead of abandoning this losing strategy, Dow is trying to get us running faster on the same old broken pesticide treadmill. Dow and USDA are hoping to quietly approve a new genetically engineered corn seed that basically swaps RoundUp (glyphosate) out and an even worse weedkiller (2,4-D) in. Bad idea.